A recent visitor to the museum was particularly interested in seeing Brum and he also had an interesting tale to tell. Apparently, he and his Dad have been building another Brum. To prove the point, when he arrived home he sent us some pictures and here they are: 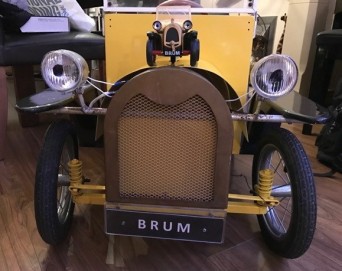 He tells us that his Brum is 120 x 60 x 80 cm and just look at that front suspension; it looks very professional and could make our Brum quite jealous!

Luke, we would love to see more pictures as your project progresses and a few words to tell us about your work would be great.

Thanks for contacting us and sending your photos.

Hello everyone. It’s been a little while since I grabbed the headlines in this blog, but then I’m a modest little chap really, living quietly next to my best friend, the XK140 Jaguar, in the museum’s Mill Gallery. I’m quite happy to let others make the news while I amuse the children in the museum. However, I’ve been keeping up with the latest news on these so-called driverless cars and my antifreeze is starting to bubble. I have to speak!

It all started when my guardian Graham (you know, the young one at the museum) sent out this rather fetching photo of me having fun in the snow. See for yourself – I do seem to be ageing very well even if I say it myself. 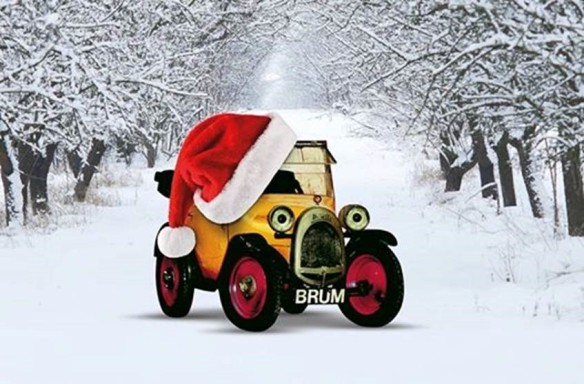 Anyhow, back to the point, a very observant recipient of Graham’s message was concerned that Father Christmas’s hat might be blocking my driver’s view of the road and even suggested that I might be committing some sort of motoring offence. Well, I WAS offended! DRIVER indeed! Have you ever seen anyone sitting in my driver’s seat? See those headlights, well those are my eyes and I haven’t hit anything (much) in the last 25 years – that hat is no problem at all!

My cooling system was churning, my suspension went all wobbly and my doors and bonnet went into a flap ……. but I’m alright now. I have been far too modest for far too long! Time to speak out.

Twenty-five years ago, I was driving around the streets of Bourton on the Water and even around very big towns all by myself – I was even given a good rubbing down by a very nice bunch of firemen. (I’m told you can see me on something called your tub I think it was).

Ah, hang on …… Graham has just whispered in my wing mirror. It seems that driving on the road without a driver, 25 years go, may not have been entirely legal, he said something about a crusher – not sure what that is but it doesn’t sound very nice. I think I’ll just have to keep my bonnet down for a while.

Have a wheely Happy Christmas and don’t forget to come and see me next year. I’m told we reopen on 11th February 2017. Toot toot.

A smart new building has appeared in the grounds of the Cotswold Motoring Museum and Toy Collection. On the 1st and 2nd December 2016, Dunster House buildings delivered and erected the 15-square metre building on an existing concrete slab in the museum gardens. Not only has this tidied up a rather unsightly corner of the garden but, more importantly, it has provided a dry, secure space in which museum staff and volunteers can work on those items in the museum collection that need a spot of tlc.

Currently, such work is performed in the meeting room on the first floor of the main museum building and must share space with all the other activities that take place in that room. Before a school visit, for example, work must be moved out of harm’s way or made safe from little fingers. The new building, once fitted out will be used as a clean work area where items can be safely left whilst they are being restored. It will also become part of the ‘visitor experience’ with the large glass area providing an opportunity to see on-going restoration work.

The purchase of the workshop, erection and fitting out is being funded by the Friends of the Museum using funds generated over the years through donations and the sales of raffle tickets, model car sets, badges and refreshments from the shepherd’s hut.

The application of timber preservative and fitting out will hopefully be completed before the museum reopens on 11 February 2017.

A fund raising trip of a lifetime between Oxford England and Oxford New Zealand, undertaken in 2004/5 in a Morris Oxford, was described by the intrepid travellers, Jo and Tim Nicholson. As well as their radio interview, photographs were on display for museum visitors to admire. In all, a great atmosphere in front of the museum with visitors enjoying the July sunshine.

It is always good to receive praise but when it comes as a complete surprise and is completely unsolicited, then it is even better.

Clive Montellier generously left his highly complementary views of the museum on his blog. Here is a sample:

“One of the great joys of having a base in the Cotswold is the proximity of my favourite motoring museum of all time, the Cotswold Motoring Museum in Bourton-on-the-Water. At a time when more and more museums seem to be subscribing to the adage that ‘less is more’ and hiding the bulk of their collections away, the Bourton museum seems to squeeze more in every time we visit. Nor are the exhibits hidden away behind ropes and barriers. Barring the hundreds of small items that really do have to be in display cases, everything is either out on display or attached to the wall as appropriate, giving the visitor the chance to peer up close at the collection and leaving one with the rather nice feeling of being regarded as an adult capable of treating the artefacts with a bit of respect.”

Clive’s full blog entry can be found at this link. Many thanks Clive.

The winner of our 2015 prize draw is Mr Geoff James from Hereford.

His prize, for two people, includes the use of a classic car for a weekend of his choosing during the summer of 2016, along with Saturday night B&B and Sunday lunch in the Cotswolds.

Congratulations! We look forward to some pictures of Geoff enjoying his prize later in the year.

Today was the day when the winner of our 2015 Cotswold Classic Raffle was drawn. Contact will now be made with the lucky winner and further details will appear here in due course.